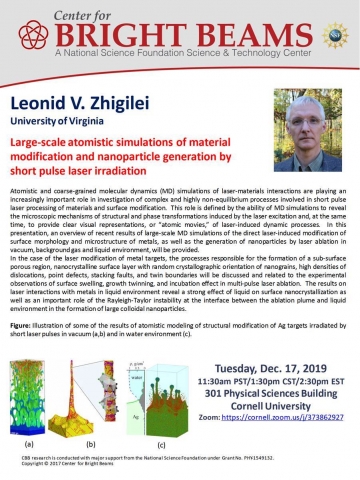 A poster, it reads: Center for Bright Beams: A national seicnec foundation science and technology center.

Large-scale atomistic simulations of material modification and nanoparticle generation by short pule laser irradiation. With a portrait of a man.

Atomistic and course-grained molecular dynamics (MD) simulations of laser-materials interactions are playing an increasingly important role in investigation of complex and highlight non-equilibrium processes involved in short pule laser processing of materials an surface modification. This role is defined by the ability of MD simulations to reveal the microscopic mechanisms of structural and phase transformations induces by the laser excitation and, at the same time, to provide clear visual representations, or "atomic movies," of laser-induced dynamic processes. In this presentation, an overview of recent results of large-scale MD simulations of the direct laser-induced modification of surface morphology and microstructure of metals, as well as the generation of nanoparticles by laser ablation in vacuum, background gas and liquid environment, will be provided.

In the case of the laser modification of metal targets, the processes responsible for the formation of a sub-surface porous region, nanocrystalline surface layer with random crystallographic orientation of nanograms, high densities of dislocations, point defects, stacking faults, and twin boundaries will be discussed and related to the experimental observations of surface swelling, growth twinning, and incubation effect in multi-pulse laser ablation. The results on laser interactions with metals in liquid environment reveal a strong effect of liquid on surface nanocrystallization as well as an important role of the Rayleigh-Taylor instability at the interface between the ablation plume and liquid environment in the formation of large colloidal nanoparticles.

Figure: Illustration of some of the results of atomistic modeling of structural modification of Ag targets irradiated by short laser pulses in vaccum (a,b) and in water environments (c).

Event information, same as on page.