Professor Yuri Orlov, an extraordinary accelerator scientist, human rights activist, and soviet dissident recently passed away. There will be a commemoration of his contributions to accelerators and activism on Wednesday, November 18th.

Just days before his death, the APS awarded him the Robert R. Wilson Prize, which recognizes outstanding achievement in the physics of particle accelerators.

Yuri Orlov was an extraordinary human being: indefatigable human rights activist and highly productive scientist of renown. He was born 13 August, 1924 and passed 27 September, 2020

He graduated from High School in 1947 after a 6 year interruption for war service as a worker in a T-34 tank factory and as an artillery officer in the Red Army.

After university, as a graduate student and employee of the Institute for Theoretical and Experimental Physics (ITEP) in Moscow, he was fired for giving a pro-democracy speech at ITEP in 1956. This led to a 2 year delay in the publication of his PhD thesis as well as a 16 year banishment from Moscow. Upon returning to Moscow in 1973 he helped organize the Soviet branch of Amnesty International and wrote his famous "Letter to Brezhnev” in defense of Andrei Sakharov and demanding political and economic reforms. In retaliation he lost his job and had to subsist as a private tutor. Three years later he cofounded the Moscow Helsinki Group which monitored Soviet adherence to the civil rights provision of the 1975 Helsinki Accords between the Soviet Union and the West. In 1977 Yuri Orlov was arrested and sentenced to 12 years of hard labor and exile in Siberia. In 1986, partly as a result from pressure of the widespread international ``Free Orlov” movement spearheaded by the Federation of American Scientists and other science organizations, Yuri was stripped of Soviet citizenship and deported to the US as part of a prisoner exchange. His offer of employment by Cornell also played a major role in his release. Ronald Reagan received Yuri at the White House on Oct. 7 1986 only days after his arrival in the US. Yuri traveled around the US and Europe for the next several months to bring attention to the remaining imprisoned dissidents in the Soviet Union. He arrived at Cornell in 1987.

Yuri was an undergraduate student at the Physical-Technical Institute in Moscow where he studied under Kapitsa, Landau, Budker and Berestetsky. As a graduate student at ITEP he worked on the design of a proton synchrotron and did original work on accelerator theory notably describing the non-linear motion of particles in terms of Hamiltonian perturbation theory known from planetary motion. After banishment from Moscow he went to study and work at the Yerevan Physics Institute (YPI) in Armenia where he received his first PhD and did the theoretical design of the accelerator to be built at YPI, writing many highly original papers on accelerator theory. These involved some of the earliest papers on quantum radiation damping and excitation of particle oscillations in accelerators, and also addressed the dynamics of beam polarization. In parallel to his work at Yerevan, Yuri was also engaged in work at the Budker Institute of Nuclear Physics (BINP) in Novosibirsk where he received his second PhD in 1963. While there he participated in the design of colliding beam accelerators, the first of which came into operation in 1963. He was elected a corresponding Member of the Armenian Academy of Sciences and became a Professor at YPI in 1970. From 72-73, although forbidden to work in Moscow he was employed at the Research Institute of Terrestrial Magnetism and Dissemination of Radio Waves in the Moscow region. At this point his story moves to the human rights activity described above.

In 1987 Yuri arrived at Cornell as a Senior Scientist and immediately became involved in a complex experiment at Brookhaven National Laboratory and made original contributions to extracting precision results on the magnetic moment of a fundamental particle, the Muon. He also practiced as a Visiting Scientist at CERN, the European Laboratory for Nuclear Research and in 1993 became an American citizen. In 2008 Yuri Orlov was appointed as Professor of Physics and Government at Cornell, becoming emeritus in 2015, the same year he joined another extremely difficult experiment to make precision measurements of the electric dipole moments of several fundamental particles looking for departures from expected values and for fundamental symmetry violations in nature. While at Cornell, he also conceived of many ingenious improvements to the Cornell accelerator.

Prior to his arrest in 1977 he co-authored 50+ scientific papers in leading journals and proceedings, as well as 40 human rights documents and appeals. While in labor camp he authored three scientific papers, several human rights appeals and a document on the situation of prisoners and forced laborers in the Soviet Union, all of which were smuggled out, largely on snippets of cigarette paper, and published in the West. After his arrival at Cornell he co-authored another 100+ scientific articles. His autobiographical memoir ``Dangerous Thoughts” was published in 1991 in the US, Russia, Germany, France and the Ukraine.

In 2020 Professor Orlov was awarded the APS Robert R. Wilson Prize for Achievement in the Physics of Particle Accelerators just a few days before his passing.

Yuri Orlov’s achievements as a giant of human rights as well as a leading scientist in accelerator physics made his life unique and much to be admired. 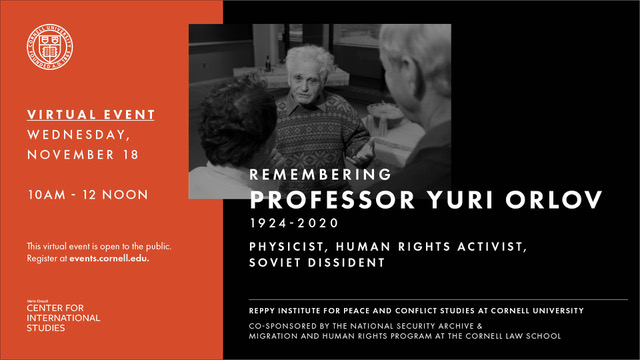